Yogis may be enjoying a surprising benefit when they unroll their mats and strike a pose. A new study finds that just 20 minutes of hatha yoga stimulates brain function.

Researchers from the University of Illinois at Urbana-Champaign enlisted 30 subjects to take tests of working memory and inhibitory control, two measures of brain function associated with the ability to focus, retain, and use new information, the researchers said.

Subjects who took a single, 20-minute yoga session were significantly faster and more accurate on their tests than subjects who walked or jogged on a treadmill for 20 minutes.
Participants on the treadmill exercised with the goal of maintaining 60 to 70 percent of their maximum heart rate throughout the exercise session. “This range was chosen to replicate previous findings that have shown improved cognitive performance in response to this intensity,” the researchers said. 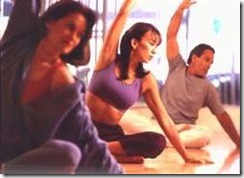 “Yoga is an ancient Indian science and way of life that includes not only physical movements and postures but also regulated breathing and meditation,” said study lead Neha Gothe. “The practice involves an active attentional or mindfulness component but its potential benefits have not been thoroughly explored.”

Subjects who practiced yoga performed a 20-minute sequence of seated, standing, and supine yoga postures, with the class ending in a meditative posture and deep breathing.

“The breathing and meditative exercises aim at calming the mind and body and keeping distracting thoughts away while you focus on your body, posture or breath,” she said. “Maybe these processes translate beyond yoga practice when you try to perform mental tasks or day-to-day activities.”

Findings, announced June 5, appear in the Journal of Physical Activity and Health.
A separate study published last month finds that twice-weekly yoga sessions can reduce high blood pressure. In the study, researchers led by Dr. Debbie Cohen of the University of Pennsylvania tracked 58 women and men, aged 38 to 62, for 24 weeks.

Another study published earlier this year in the journal Frontiers in Psychiatry found that the practice may soothe depression and help sleep problems.